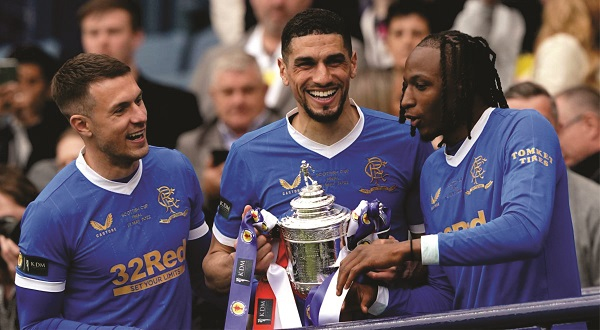 Super Eagles trio – Calvin Bassey, Joe Aribo, and Leon Balogun – helped Rangers to win the Scottish Cup on Saturday as they secured a 2-0 extra-time victory over Hearts in the final clash.

Bassey was also named the man of the match.

The Nigerian stars put up brilliant performances for Rangers as the club claimed its first Scottish Cup title in 13 years.

After agonisingly losing out on the Europa League to Eintracht Frankfurt via penalties in midweek, the Gers did well to put the defeat behind them and end the season on a bright note.

While Rangers largely dominated the game, they lacked the cutting edge in front of goal; firing blanks all through 90 minute.

Hearts had their own few moments but getting past the defence line marshalled by Balogun and Bassey was a herculean task.

Aside from being solid at the back, Bassey also made brilliant runs to support the attack but unfortunately, the Gers could wrap the game within the regular 90 minutes.

Though delayed, Rangers eventually showed the champions stuff in them in extra time, as two goals from Ryan Jack and Scott Wright sealed a 2-0 victory for Van Bronckhorst’s to end the 13-year Scottish Cup drought.